Updated 2019
Jack Frost is the main character in the 3D computer-animated film Rise of the Guardians. Jack was originally a human boy, but lost his own human life saving his sister after she fell into the water while ice skating. The Man in the Moon witnessed Jack’s heroism and turned him into a Winter Spirit. Jack loses all memory of his former life as a human and begins a new life full of mischief. Jack Frost makes an easy costume for boys and men to wear on Halloween or for Cosplay or other dress up occasions. Here are some ideas for creating your own Jack Frost costume.

One of the essential pieces in creating a do it yourself Jack Frost costume is his trusty Shepard’s crook. Though there are not any ready made versions that exactly resemble the shape of the character’s crook in the movie, a typical looking cane will still work well for the costume. Made from brown plastic, this crook comes in four easy to assemble pieces that require being screwed together. Measures 68 inches tall. The sweatshirt is the same shade of blue from the movie and is available in sizes extra small, small, medium, large, and extra large, and XX large. Made from 50% polyester and 50% cotton fabric, the hoodie is washable and will not fade. Hoodie sweatshirt features a hand painted snow swirl design on the hood, around the neck and shoulders areas, around the cuffs at the wrists, and around the edges of the pocket on the shirt. Perfect garment for playing the part of the mischievous Jack Frost. 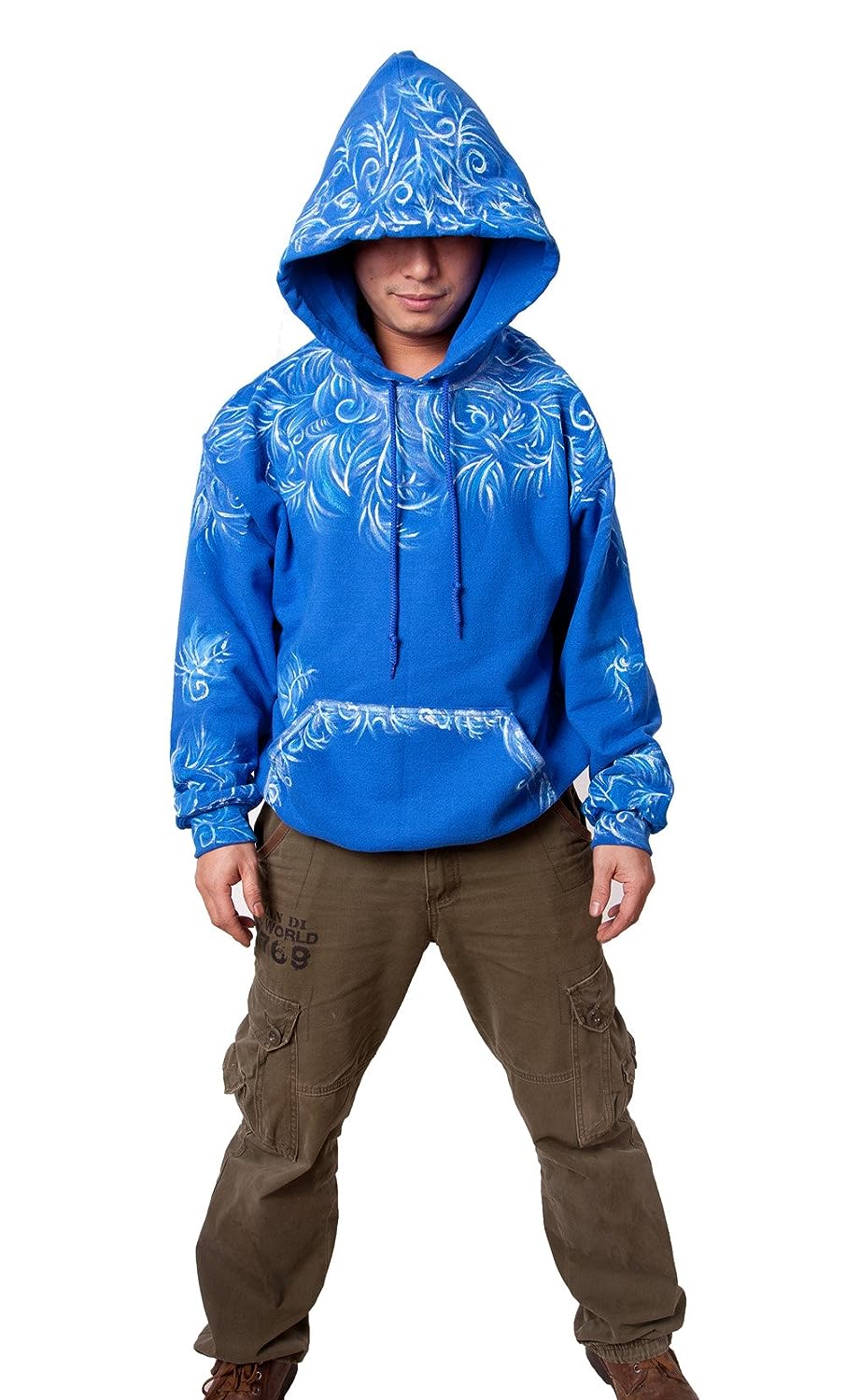 This is a short wig with longish bangs, similar to the hairstyle of Jack Frost in the Rise of the Guardians movie. While Jack is typically known for having white hair, in some images he seems to have a bluish hue to his hair, and this wig matches his trademark blue sweatshirt hoodie perfectly. Wig is made from high temperature resistant fibers. Can be paired with blue hoodie and brown pants for an authentic Jack Frost costume. 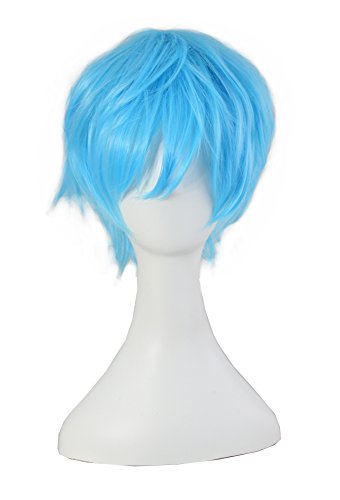 Perhaps in portraying Jack Frost you would prefer a white Shepard’s crook over a brown one to give it a more “frozen” appearance. This crook is made from 100% plastic with four detachable pieces that easily screw together to assemble, or come apart for handy storage when not in use.

This wig makes for the perfect Jack Frost costume. It is made from high quality Japanese synthetic fibers which are heat resistant. Wig has a shaggy close to shoulder length appearance with longish bangs and hair is a silver white color. Adjustable hooks inside the wig allow it to fit most sizes easily. Package contains one white wig and one free wig cap in a polybag. 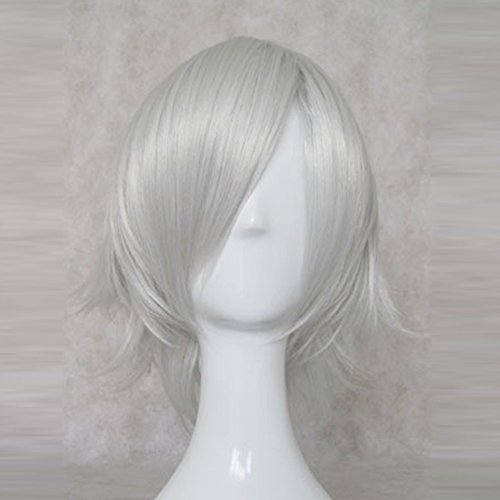 These brown pants could be cut shorter and frayed with scissors around the mid-calf area to make them look ragged like those of Jack Frost. Pants are made from 65% polyester and 35% cotton and can be machine washed warm and tumble dried on low setting. Features hook and eye closure and two back welt pockets. Available in several different sizes.

This video has helpful hints for creating the pants of Jack Frost (she uses shorts but you could do this effect on longer pants). This tutorial also covers the making of a very authentic replica of the staff used by Jack Frost. Next, she moves on to making the blue hoodie sweatshirt by painting on the white snow swirl details.

This tutorial uses a mop handle and two cardboard tubes like those that come with gift wrap. You will also need paper mache clay, dark brown paint, light brown paint, white paint, glitter paint, tissue paper, and duct tape. The designer tapes you through the step by step process of creating a very realistic staff that achieves the unique shape of the crook of the staff. A multi step painting process also gives the staff the fine details and makes it look like the staff in the movie. The perfect accessory for any Jack Frost costume.

This is a great makeup tutorial in which the person applies a whitish powder to the whole face for a matte effect, emphasizing the eye creases, nose bridge, and jaw line. Loose baby powder is also used to achieve this effect. To make the look even more authentic, the artist placed bright blue contacts in her eyes, just like the character of Jack Frost. She goes on to demonstrate how to get the full eyebrow effect and then conceals her lips with a nude shade of lipstick to make them blend in with the rest of the pale, frosty looking complexion. She then adds a white anime style wig to complete the look and add the finishing touch.

What pooch wouldn't want to dress up as a barbarian, or Cinderella to celebrate the special day with the family? And certainly, every dog wants to go out and party with the best. So to garb man's best friend, here is a selection of the best Halloween costumes for dogs. Search on this page, and … END_OF_DOCUMENT_TOKEN_TO_BE_REPLACED

The best thing about Halloween is the candy, and the second best thing is the decorations. It is so much fun to decorate your house or office with spooky Halloween decorations that are meant to be seen at night. Blacklight decor, votives, decals, and lights all make up the ambiance of a haunted … END_OF_DOCUMENT_TOKEN_TO_BE_REPLACED

Teenagers are hard to please, but Halloween is a fun holiday where they can dress up or down, hang out with their pals, and go trick or treating with friends, in these great Halloween teen costumes. These costumes are fun without being risque, and are in sizes for preteens and teens. If you need a … END_OF_DOCUMENT_TOKEN_TO_BE_REPLACED

Trading Halloween cards with friends in school or at a party is so much fun, or send spooky Halloween greeting cards in the mail to your favorite people. Even better, send Halloween candy to all your friends or get together to trade and share after you go trick or treating on Halloween Eve. These … END_OF_DOCUMENT_TOKEN_TO_BE_REPLACED

This baby bat above is one of the wonderful baby Halloween costumes for girls or boys, and they will have so much fun running around pretending to fly. The costumes on this page come in several sizes for infants and toddlers, so just click through to our partner website to browse all of the sizes … END_OF_DOCUMENT_TOKEN_TO_BE_REPLACED

Here are some awesome Halloween lights to spook your neighbors and scare your friends. With this wide variety of motion-sensor lights and props, you can't miss for your yard, doorway or party atmosphere. … END_OF_DOCUMENT_TOKEN_TO_BE_REPLACED