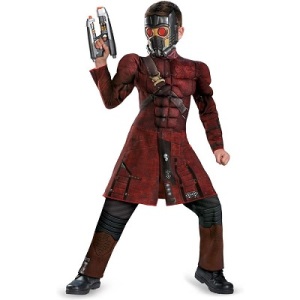 Star Lord is a fictional superhero, the alter ego of Peter Quill, who first appeared in Marvel Comic books in January of 1976. Quill is the son of an alien father and a human mother, and takes on the role of an interplanetary policeman known as Star Lord. The Star Lord character appeared in the crossover comic called Annihilation in 2006, and Annihilation Conquest in 2007, where he became the leader of a superhero group from space known as the Guardians of the Galaxy.

This is an officially licensed Marvel Costume made from 100% polyester.  The costume looks as if it is separate pants and a jacket, but it is really an all in one jumpsuit with the “jacket” being attached. This version of the Star Lord costume has defined and padded areas in the torso and arms to give the superhero wearer a muscular appearance. Includes a Star Lord character mask with glow in the dark eyes for nighttime fun. Comes in boys sizes small ( 4 to 6), medium (7 to 8), and large (10 to 12). Pair with black boots or shoes and a toy blaster gun for the perfect Star Lord costume for Halloween or dress up.

Guardians Of The Galaxy Star Lord Quad Blaster by Marvel 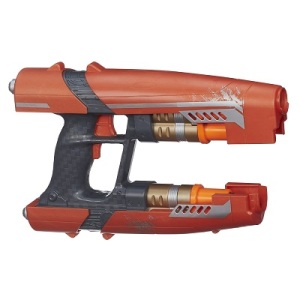 This cool toy quad blaster is the perfect replica of Star Lord’s weapon. The blaster is red, and comes with four darts. Dart can be loaded into four barrels at once and can be fired at distances of up to twenty five feet. One dart may be fired alone, or two darts may be fired at the same time. Perfect accessory for any Star Lord costume.

For the adult Star Lord fan, this costume features a 100% polyester jacket that is hand washable. Costume comes with a Star Lord character mask with eyes that glow in the dark. Costume does not include pants or toy blaster gun. Pair with any dark pants and black boots to complete the outfit.

This costume is made to look like the older comic book version of Star Lord’s costume and is a high quality, hand made piece. Costume can be tailor made to fit any size. Each costume is custom made and takes around ten to twenty days to complete, so order early! Costume set includes navy blue jacket with red trimming and white logo, navy blue pants, red gloves, white show covers that look like boots, black belt with silver buckle, and black bags. Pair with the Star Lord mask and blaster gun for a complete and authentic look. 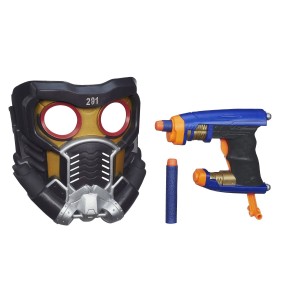 This set comes with a Star Lord character mask and a mini blaster gun with dart that can be fired at up to forty feet. This is the perfect accessory set for the above mentioned Cosplay costume, or when piecing together a Star Lord costume of your own creation.

Guardians Of The Galaxy Star Lord Tee Shirt by Impact

This tee shirt is made from heavy duty pre-shrunk cotton and comes in a black color. Available in sizes small through XX large. Sizes are unisex so either a man or woman can wear it. This could be used as part of a Halloween costume with the character mask and blaster gun, for those who don’t like going all out to create a costume.

Make Your Own Star Lord Costume

Check out your local thrift stores for long men’s trench coats in a red or maroon color. This could be a key piece in creating your own Star Lord costume. Simply combine the coat with a dark pair of pants and boots, along with character mask and blaster gun to make the perfect costume.

What pooch wouldn't want to dress up as a barbarian, or Cinderella to celebrate the special day with the family? And certainly, every dog wants to go out and party with the best. So to garb man's best friend, here is a selection of the best Halloween costumes for dogs. Search on this page, and … END_OF_DOCUMENT_TOKEN_TO_BE_REPLACED

The best thing about Halloween is the candy, and the second best thing is the decorations. It is so much fun to decorate your house or office with spooky Halloween decorations that are meant to be seen at night. Blacklight decor, votives, decals, and lights all make up the ambiance of a haunted … END_OF_DOCUMENT_TOKEN_TO_BE_REPLACED

Teenagers are hard to please, but Halloween is a fun holiday where they can dress up or down, hang out with their pals, and go trick or treating with friends, in these great Halloween teen costumes. These costumes are fun without being risque, and are in sizes for preteens and teens. If you need a … END_OF_DOCUMENT_TOKEN_TO_BE_REPLACED

Trading Halloween cards with friends in school or at a party is so much fun, or send spooky Halloween greeting cards in the mail to your favorite people. Even better, send Halloween candy to all your friends or get together to trade and share after you go trick or treating on Halloween Eve. These … END_OF_DOCUMENT_TOKEN_TO_BE_REPLACED

This baby bat above is one of the wonderful baby Halloween costumes for girls or boys, and they will have so much fun running around pretending to fly. The costumes on this page come in several sizes for infants and toddlers, so just click through to our partner website to browse all of the sizes … END_OF_DOCUMENT_TOKEN_TO_BE_REPLACED

Here are some awesome Halloween lights to spook your neighbors and scare your friends. With this wide variety of motion-sensor lights and props, you can't miss for your yard, doorway or party atmosphere. … END_OF_DOCUMENT_TOKEN_TO_BE_REPLACED